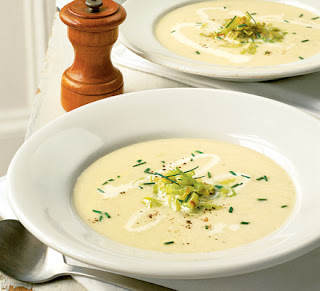 I'm so excited...my daughter in law is showing an interest in cooking and calling to consult on recipes!  I guess having great cooks on both sides of the family finally made her throw in the towel.  My sister in law, on the other hand, took a different tack after some unsuccessful attempts in the kitchen, and decided she just wasn't going to compete.  I think she's the smartest of the lot.  Now when we get together, guess who's in the kitchen sweating it out and guess who's sitting on the sofa cool as a cucumber!

By coincidence, when my daughter in law called, I also had some leeks in the refrigerator about to go bad and already had a recipe in mind.  She must think I'm a genius. This afternoon we are having a cooking class on the phone and hopefully a nice surprise for my son when he comes home for dinner.  Not only is leek and potato soup delicious and appropriate for the cold weather, it's also very easy and quick to make.  The addition of bacon is all her idea...I guess she's catching on quick!

In a large heavy saucepan, sautee the leeks in the butter until tender, about 8 minutes.  Add the potatoes, chicken broth, and salt and bring to a boil over high heat. Cover partially, reduce heat, and simmer for 20 to 30 minutes until the potatoes are tender. Correct the seasoning, to taste, and let the soup cool a bit.  Puree with a handheld immersion blender, or in batches in a food processor.

Return to the saucepan, add the cream and reheat before serving. Top each serving with a sprinkling of fresh chives and bacon, if you like.

For the cold version known as Vichyssoise

The Ingredients are the same, omitting the Bacon, of course.

1. Simmer the vegetables in stock or broth instead of water as described in the master recipe [Potage Parmentier]. Puree the soup either in the electric blender, or through a food mill and then through a fine sieve.

2. Stir in the cream. Season to taste, over-salting very slightly as salt loses savour in a cold dish. Chill.

3. Serve in chilled soup cups and decorate with minced chives.
Posted by lindaraxa at 2:24 PM