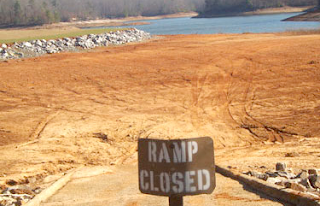 
Without question, 2009 was the most eventful in Lake Lanier's history.

That seems an extravagant claim until you sit down and look back over the events that have shaped the year. That's what we will do in this special article:

This time last year, Lake Lanier was in a perilous state. Several years of drought had left the lake hovering around 20 feet below full pool and flirting with record lows. The 1071 Coalition had been formed to fight for a rise back toward full pool but businesses and locals were desperate for better times.

The tide finally turned about a year ago today and by mid-January the lake had risen 4.5 feet in one month. It was to be a precursor of more to come.

Also in this month, Sonny Perdue announced that the Forrest Wood Cup was coming to Lake Lanier in 2010. Called the "Super Bowl of Fishing" it promises to bring tens of thousands of visitors to Lanier along with international media coverage. Some were nervous about the state of the lake, but with rising levels daytime fishing tournaments were allowed back.

By spring, things were looking up and despite the objections of local lake advocates, the Corps of Engineers felt comfortable increasing water flows out of Lake Lanier. The majority of boat ramps were now open.

In two other pieces of good news, the Corps received $8.3 million in federal stimulus money to improve facilities at Lake Lanier and an agreement was reached to make Don Carter Park into Lake Lanier's Second State Park

This was a month that will reverberate around the whole south-east for years to come. Lake Lanier was placed at the center of the "Tri-State Water Wars" by a court case in Jacksonville. A federal judge ruled that Atlanta didn't have the legal right to withdraw water from Lanier. With slim to no chance of reversing that decision in Congress or the courts, Georgia had to sit down and negotiate with Alabama and Florida. Towards the end of the year, a meeting between the governors of the three states offered glimpses of an agreement, but stay tuned ... this story will have a profound long-term impact on our state.

Lake Lanier water levels soared with heavy rain that also caused damaging floods downstream. Lanier was back in the national and international spotlight with detailed coverage from thousands of newspapers and TV stations. The Corps of Engineers had to fight criticism that they let too much water out the lake during the floods.

A huge number of events took place in September including the Lake Lanier Association Shore Sweep , Dragon Boat Festival and the Grass in the Grove Bluegrass Festival. Several other events returned to the lake this year after having been cancelled due to low water levels . They included the Lake Lanier Poker Run and the UYC Parade of Lights. There were also a good number of triathlons on the lake in 2009, prompting talk that the area could market itself as a destination for triathletes.

Also this month, the last dock permits ever to be given out were awarded via a live online lottery.

The lake has spent most of the last two months over full pool as the wet fall became a wet winter. After the last few years, no-one around Lake Lanier will be complaining if we enter 2010 over that all-important 1071 foot mark.
Posted by lindaraxa at 9:57 PM