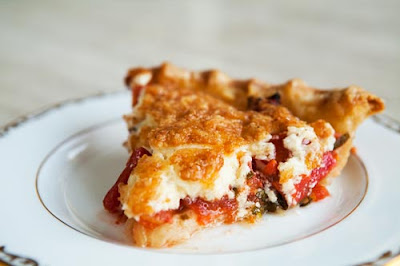 I don't want to leave you in the lurch, especially at the height of tomato season.  I will post some recipes from other sources, such as the one below, that I have tried and made changes or left alone.  Needless to say, I'm not taking pictures.  But that is the spirit of this blog, unlike Lindaraxa's Garden.  Here I mainly post recipes from other sources and most of the time include their photo.


This pie is simply delicious and great for a summer lunch.  I have taken it on the boat with us but it is really best enjoyed at home.  Tart tends to lose a bit of freshness, no matter how well you wrap it. If you want to take this recipe up a notch, you can caramelize the onions while prepping the other ingredients. If you do that, double the amount of onion.  I don't think it really needs it, at least not the first time.  I did rub a little dijon mustard on the crust,  an idea from another recipe I have.

*To slice basil, chiffonade them by stacking the leaves on top of each other, roll them up like a cigar, starting at one end slice the "cigar" crosswise in thin slices.


1 Preheat oven to 350°F. Place pie shell in oven and cook for 8-10 minutes or longer until lightly golden. If you are starting with a frozen crust, you'll need to cook it a little longer. If you are using a homemade crust, freeze the crust first, then line the crust with aluminum foil and pre-bake it for 20 minutes, then remove the foil and bake an additional 10 minutes.

2 Squeeze as much moisture as you can out of the chopped tomatoes, using either paper towels, a clean dish towel, or a potato ricer.

3 Sprinkle the bottom of the pre-cooked pie shell with chopped onion. Spread the chopped tomatoes over the onions. Sprinkle the sliced basil over the tomatoes.

4 In a medium bowl, mix together the grated cheese, mayonnaise, Tabasco, a sprinkling of salt and freshly ground black pepper. The mixture should be the consistency of a gooey snow ball. Spread the cheese mixture over the tomatoes.

5 Place in oven and bake until browned and bubbly, anywhere from 25 to 45 minutes.