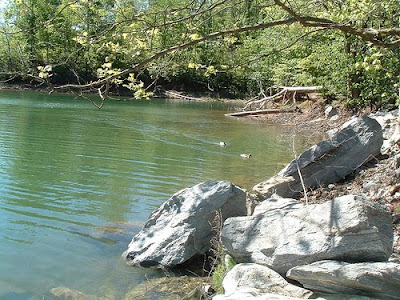 This part of the lake will never be the same now that a Westie and a Lab have moved in.
Today I made the crucial mistake of taking the dogs to the lake by myself. I've never seen such a mad dash to the water. Lily, the lab, is a master swimmer and diver. Lucy on the other hand, just waddles along as fast as her little paws can take her. She hasn't dived off the dock yet, but it's only a matter of time.
I took them down around noon to see how our end of the lake had fared during the deluge we had last week. The lake was beautiful. The water clear, hardly a cloud in sight, the noon sun high up in the sky and a family of ducks eating up the whole scene until these two came barreling down the hill. Lily does not even stop, she just dives off the dock. Lucy wades in from the shore but soon catches up to her new sister. I am just mad at myself for forgetting the camera at the house and failing to catch such a beautiful scene for my blog!
We spent about a half hour on the dock with the dogs, playing, running around and splashing in the water. The trouble happened on the way back to the house. I must have taken a wrong turn and ended down by a brook with a quaint little bridge that led to some houses on the other side of ours. That's when I lost sight of Lily and guess who behind her.
All my neighbors must know by now that the new family has a dog named Lily and another one named Lucy. I kept calling their names but nothing, not the slightest noise. Then I looked up at one of the houses and saw Lily on the deck; but I couldn't see Lucy and I can always see her, she's so white! Finally, I saw her near the deck except she couldn't climb up. Well, down and up I went, across the bridge to the other side of the brook yelling and screaming until finally they decided the hide and seek game was over. Off the porch they went, back down to where I was, at 100 mph and damn it if Lily didn't lead me up the right path back to the house.
By the time we got back they were so muddy I had to give them both baths, towel off Lily and blow dry Lucy, who will follow me around the house until I dry her and put the collar back on. Then it was time for me and another shampoo and shower. By 2 pm I was so exhausted I put on my nightgown and crawled back into bed! That was the extent of my day today. Welcome to the lake, city girl!
Posted by lindaraxa at 10:39 PM