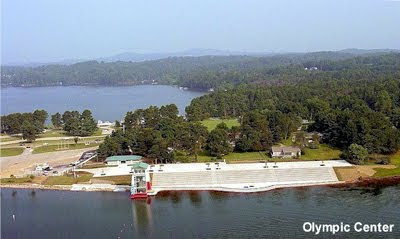 By Ken Sugiura
The Atlanta Journal-Constitution

When Mike Lane became the head women's rowing coach at the University of Pennsylvania four years ago, he knew where he had to take his team to make it great. When spring break arrives at the Ivy League school, Lane points the bus to North Georgia and Lake Lanier.

The Quakers rowing team has become a springtime fixture in Gainesville, bunking down at the Holiday Inn and making the annual pilgrimage to the Monkey Barrel for pizza.

"Everyone's super friendly at the Holiday Inn," team captain Jennifer Drossner said. "It's quite a change from Philly in the way it's hospitable."

Since the 1996 Atlanta Olympics, college teams have descended upon Lake Lanier for their spring break training, lured by the chance to row Olympian waters. After a lull in recent years, the area is taking on increasing numbers of visitors. About 750 rowers representing about 15 teams have or will train out of the Lake Lanier Rowing Club for winter or spring training, up about 50 percent from last year. Earlier this month, Penn shared the boathouse with three other teams. Last week, the U.S. Naval Academy and Smith and Ithaca colleges' crews have plied Lanier's placid waters.

"The perfect location is almost impossible to find," said Lane, who worked at the club for about a year shortly after the Olympics. "This is as close to perfect as you'll find."

A variety of amenities recommend Lanier. The lake water is still, protected from wind, and teams can row for miles without having to turn around. The boathouse and docks, constructed for the Olympics and now leased to the club from the city of Gainesville and Hall County, allow teams to store their rowing shells. Access to the water is easy. The weather, compared to the Midwest and East, is mild. Wittenberg's training site was still frozen over, coach Angie Mason said.

Hotel rates in Gainesville are generally less expensive than those in Florida, where many college teams train over spring break.

Mason called Lanier "one of the best spring break training experiences we've had. The facilities, the water, the people, everything has been fabulous."

Club coach and executive director Jim Pickens hopes that Lake Lanier will eventually take on 60 teams and about 3,000 rowers for winter and spring training, which would boost the non-profit club's profile and revenues and turn Gainesville into something like Cancun with oars. The club charges usage fees and rents out launch boats for coaches riding alongside their rowers.

Pickens, 25, came to the club in August 2008, when the facility had been without a director for about two years. Pickens was a coach and rowing equipment salesman, living in Raleigh with his wife Lauren, two rowing devotees who met on their college team in Virginia. Club membership and morale were dropping, club president Joe Kelenfy said.

"We had been in a sustaining mode, a survival mode," he said. Kelenfy spoke with Pickens to see if he knew of anyone with interest in the job. Said Pickens, "I said, ‘Yeah. I do.' "
Pickens wanted a new challenge and saw one in the club."I guess the thing that really made me take the job is the fact that there's just so much stuff here," he said. "To make this place a fantastic place would require a lot of work, but it would take a lot less than other places."

Membership has picked up, from about 60 at its lowest to about 100. Pickens is trying to build up the youth program and has a vision for local high schools fielding rowing teams.

"Since these two have come, this place has come alive," said Kelenfy, referring to Pickens and his wife, who also works at the club part-time. "There's a whole new energy."

The increase in visiting college teams, responding to some of the hundreds of e-mails Pickens sent to coaches, is part of the revival. Pickens also has applied to host upcoming NCAA championships and youth and masters national championship regattas. He hopes that with some updates to the facility, it can host international rowing events.

After the Olympics, the club hosted the 1998 and 2001 NCAA regattas, among other elite events, but had fallen out of the mix recently. Penn's Lane called it a "prime venue" for an NCAA championship.

For Lane, there'd be one problem about bringing so many teams to Lake Lanier.

Said Lane, "I don't want too many people to find out it."
http://www.lakelanierrowing.org/
Posted by lindaraxa at 3:03 PM