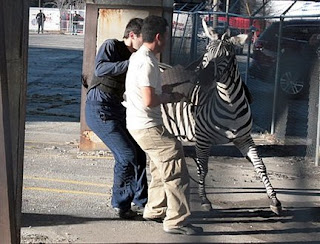 Atlanta is full of interesting animal stories.  A couple of weeks ago we said goodbye to a panda, today a zebra managed to bring rush hour traffic to a standstill.

It made its way through downtown to the interstate highway that cuts through the center of the city.

The Atlanta Journal-Constitution reports that the zebra was spotted "in the parking lot near the Richard B. Russell Federal Building, near Centennial Olympic Park, CNN and on the Downtown Connector."

Daniel Nance told the paper, "All of a sudden, a freaking zebra comes running down the street like a car. Five or six police cars were in hot pursuit. And a bunch of officers on foot. But then I got scared, thinking … what else is loose?"

Police cruisers blocked off all southbound lanes and were able to herd the zebra over to the right shoulder and off an entrance ramp, Luck said. 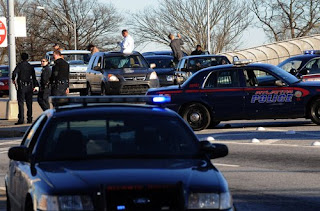 "It wasn't on the highway very long," she said. "But it was an inconvenient time for this to happen because the downtown connector southbound usually gets backed up on its own, that time of day."

Ringling Brothers and Barnum & Bailey Circus is in town this week. The circus also had a group of elephants corralled Thursday in a downtown Atlanta parking lot.

It's not the first time a zebra has been spotted along a metro Atlanta highway. In April 2008, a 2- to 3-month old zebra was found injured along Interstate 75. Authorities said at the time they thought the young zebra had likely fallen from a truck passing through Georgia and was then hit by a car.

The zebra in the 2008 incident was rushed to the veterinary school at Auburn University in Alabama, where he received several operations. He was then taken to the Noah's Ark animal rescue center in Locust Grove, Ga., where he was named Evidence and still lives today."