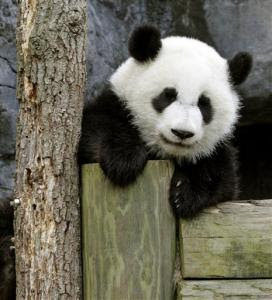 It seems that bear stories are all the rage this week.

Mei Lan, the only giant panda cub to be born in a U. S. zoo in 2006  departs Zoo Atlanta in Atlanta, Ga for Beijing tomorrow. Chinese zookeepers are advertising for a tutor to teach Chinese to the American-born giant panda arriving this week in her parents' homeland.  The language lessons, a special diet and even blind dates are also part of the red-carpet welcome being rolled out for 3-year-old Mei Lan, or Beautiful Orchid, by Chinese caretakers ahead of her arrival Friday on a special FedEx flight from the U.S.

Under a deal between China and the U.S., all giant pandas originally from China are only lent out to foreign zoos for scientific study for several years. They and any cubs they produce must all return to China eventually.

Determined to help Mei Lan adapt more quickly to her new life, the caretakers at her new home, the Chengdu Panda Breeding Research Center in the southwestern province of Sichuan, are recruiting a language teacher via the Internet. Mei Lan has lived at a zoo in Atlanta, Georgia, since her birth in 2006.

"Mei Lan has been living in the United States since she was born, and she must be unfamiliar with Chinese," Huang Xiangming, director of the center's animal management department, told the official Xinhua News Agency. 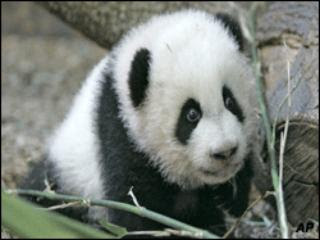 Mei Lan as a baby
The center has set up a Web site on the popular Internet portal Sina.com for Mei Lan, detailing the qualifications for a volunteer teacher: a bachelor's degree or higher, no history of infectious disease and good command of both English and Chinese.
"She will be taught Chinese with a Sichuan dialect, because people here all speak Sichuan dialect. She will become familiar with some simple phrases," Cui Kai, a staffer at the panda research center, told The Associated Press. "For example, she will be taught the phrases for going back to the cage or coming out from the dormitory."

Mei Lan will also have to gradually get used to her new Chinese diet.

"We have asked the American zookeepers to bring Mei Lan's favorite biscuits, but we will gradually use Chinese 'wotou' (steamed bread made of corn and sorghum) and fresh bamboo to replace biscuits," Huang said.

Mei Lan will be housed in a special suite during an initial quarantine period, which all pandas from overseas undergo.

Then, her caretakers hope to introduce her to a potential mate.

Panda fans are being asked to help choose a "boyfriend" for Mei Lan.

The Web page set up for her introduces eight prospective candidates -- including pandas named Superman Kobe and Yong Yong, or Doubly Brave. It includes short videos of the potential suitors in action, usually munching on bamboo, and asks voters to choose the most compatible based on their appearance and behavior.

The public's votes notwithstanding, panda experts will have the final say on which one is the best match for Mei Lan, he said. Giant pandas are known for being sexually inactive, and they are among the world's most endangered animals. 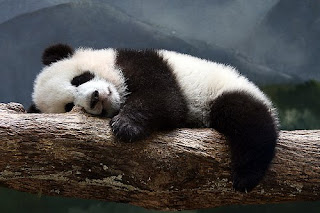 Sleeping
It is unclear if similar plans are under way for Tai Shan, a 4-year-old male panda who arrives on the same flight as Mei Lan. Tai Shan was born in Washington D.C.'s National Zoo, and he will be moving to the Bifengxia Breeding Base in Ya'an, another panda breeding center in Sichuan.

About 1,600 giant pandas live in China's wild, mostly in Sichuan and the northwestern provinces of Shaanxi and Gansu. Another 290 are in captive-breeding programs worldwide, mainly in China. There are now 13 giant pandas from China in the U.S. at four different zoos.